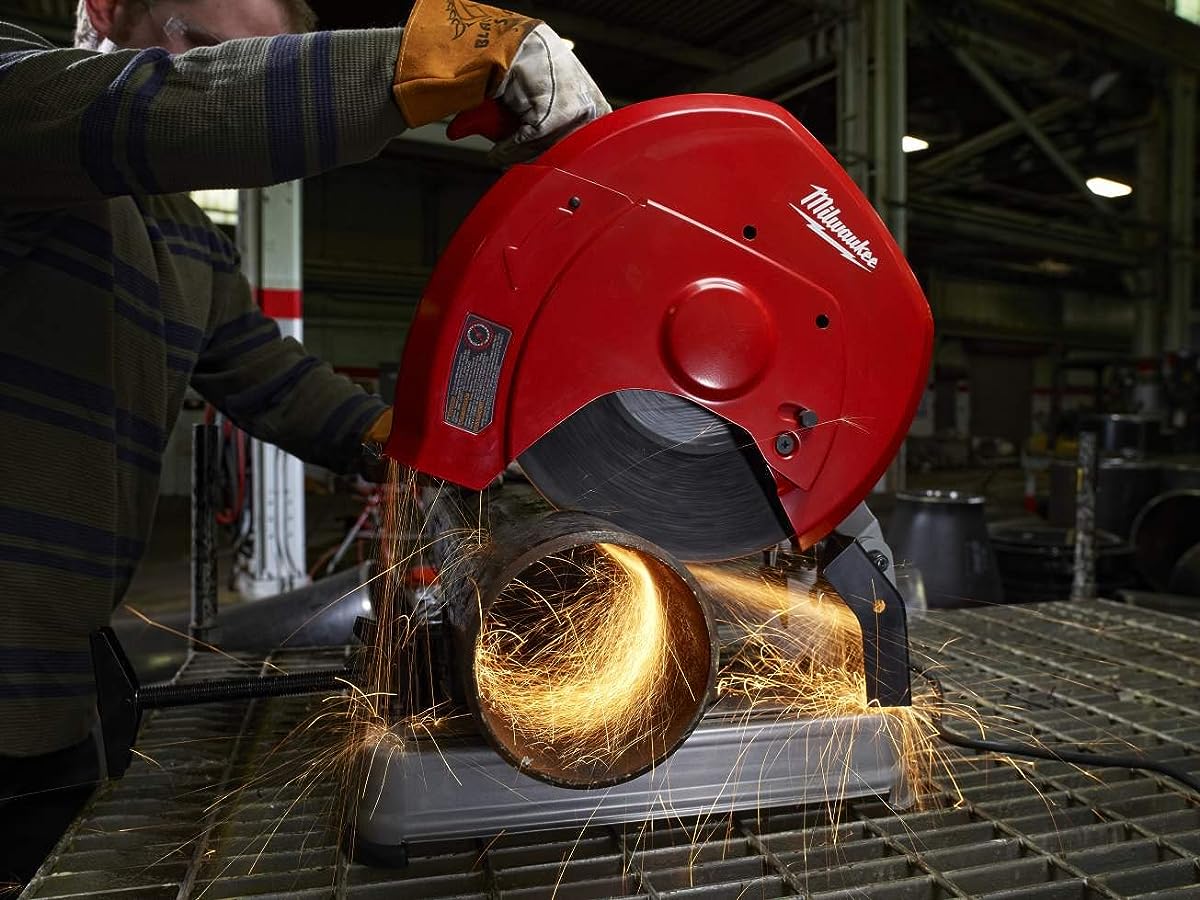 If you are looking forward to investing in the right tool for your workshop, the chop saw vs miter saw debate is one of the most confusing topics.

You will be faced with the dilemma of whether you should by a chop saw or a miter saw. Let’s go through the features and capabilities of the two and see which tool will be the best for you.

A chop saw is a very powerful tool. It can cut through tough objects including metals. As a result, a chop saw is more powerful than a miter saw.

Do you want to cut through a steel pipe? Are you looking for a tool that can cut through wood littered with nails? A chop saw will be up to the task. You will be able to make fast and clean cuts through any material, whether its metal or wood.

Chop saws have abrasive blades that give them the ability to cut through almost everything. However, chop saws cannot make angled cuts. They are designed to make straight cuts. This takes away some preciseness away.

A miter saw is capable of making bevel cuts, crosscuts, and miter cuts. It is fitted with a circular blade and a handle that is top-mounted.

The main advantage that a miter saw has over a chop saw is that making angled cuts is possible. It is an essential tool for anyone who works with wood or aluminum frames.

Working with a miter saw is easy due to its smoother blade. As a result, you will be making clean and precise cuts to give you a neat finishing.

Unlike the powerful chop saw which is also bigger in size, using a miter saw is ideal for you if you are a DIYer or a woodworker who is just looking to carry out home improvement tasks.

Miter saws exist in three variations which include compound miter saws, dual compound miters, and sliding compound miters. Compound miters have left and right pivoted blades to make it possible to make angled cuts. You can also tilt the pivots in one direction to make beveled cuts.

Both the chop saws and the miter saws use wheels as their cutting tools. The wheels are connected to a motor that is powered by electricity. By rotating the wheel, the saws are able to cut through the materials you want to cut. However, a chop saw uses abrasive wheels while a miter saw uses circular saw blades with teeth.

You can use a chop saw or a miter saw with ease. For a chop saw, using it is quite simple since you will only be making 90-degree crosscuts. For miter saws, you may require some complex settings when you want to make compound cuts.

This is one of the features that make using these tools convenient. Due to their compact nature, you can easily move with your saws from one place to another. You won’t be limited to working within your workshop.

Both of these power tools belong to the same circular blade family. They are operated in the same way, cut materials from the top to the bottom as you push the blade down onto the material you are cutting.

They are all stand-alone tools that you can use to cut wood, plastics, softer metals with miter saw and tougher metals with chop saw.

The Differences Between Chop Saws And Miter Saws

To a novice user, it’s quite difficult to tell the difference between a chop saw and a miter saw. These two products look similar in a lot of ways. Both of them have round blades fixed on a stationary base.

When you take a closer look at these tools, you will notice that they as much as they look the same, have some features that differ. For instance, chop saws have bigger motors and larger blades.

This is due to the fact that a chop saw is meant for cutting tough metals. On the other hand, miter saws have small motors and blades. They are mainly designed for cutting wood.

Otherwise, a miter saw is fitted with a laser guide that enables you to precisely position your cuts.

Other features that are only present on a miter saw but absent on a chop saw include a blade guard, a dust bag and a safety clamp. The safety clamp is very important since it keeps your saw firmly locked whenever it is in use. 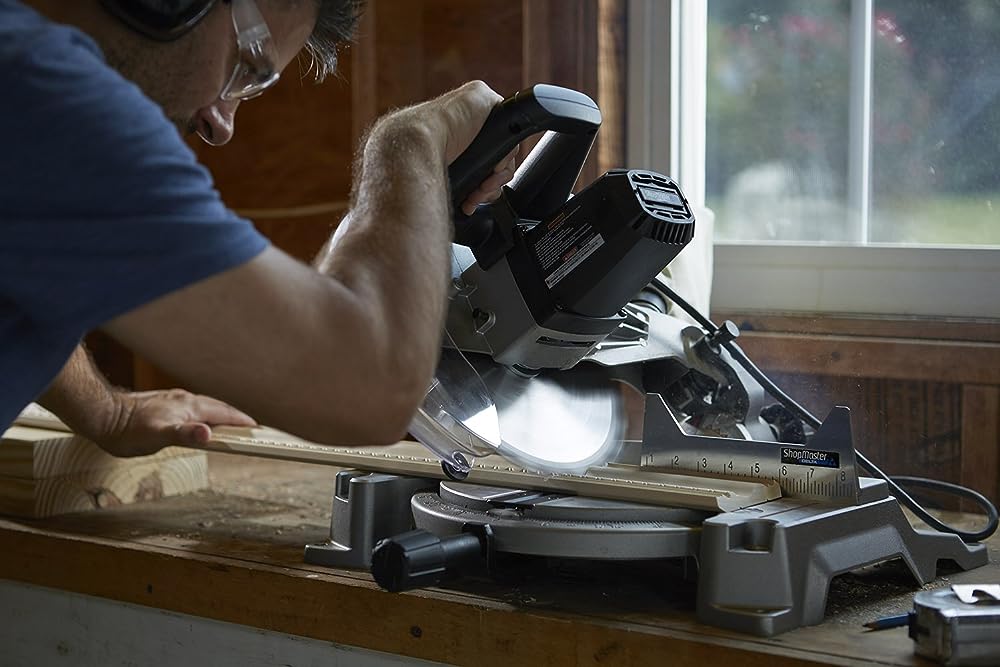 Chop saws are operated using two hands. Since they are typically faster, they should only be operated by seasoned professionals. At some point, you may have to also use your foot and knee to control its switch.

Chop saws are used in building sites and production sites since they are more powerful and can cut through anything. As a result, you should buy a chop saw if you are working with tough metals on your production site.

Miter saws, on the other hand, are mostly used by woodworkers. If you are a hobbyist or a DIYer in the woodworking realm, you should go for a miter saw.

When it comes to the axis of these two tools, this is where a major distinction exists. For a chop saw, the blades are made perpendicularly to the table. As a result, a chop saw can only make 90-degree cuts.

Otherwise, a miter saw can make cuts at various angles thanks to its swiveling shaft. If you would like to make cuts at all angles, then a miter saw is the right tool to buy. However, if you only require 90-degree cuts from your saw, then a chop saw is what you should buy.

If you have enough experience in working with both chop saws and miter saws, then making a choice on the chop saw vs miter saw debate shouldn’t be hard. This is because you already know what you want from your tool.

For regulars and beginners, the decision is not always easy. If you don’t want to choose between the two, you can have both. However, most of the time, it’s not possible to buy both of them since they cost a lot of money.

So what’s the takeaway? Well, your choice of power too will depend on what you want to achieve and what kind of materials you are going to be working with.

If you want to cut wood or soft metals, and you also want to make clean and precise angled cuts, then a miter saw is a tool to buy. If you are into home building and are working with tough metals, then you should buy a chop saw.