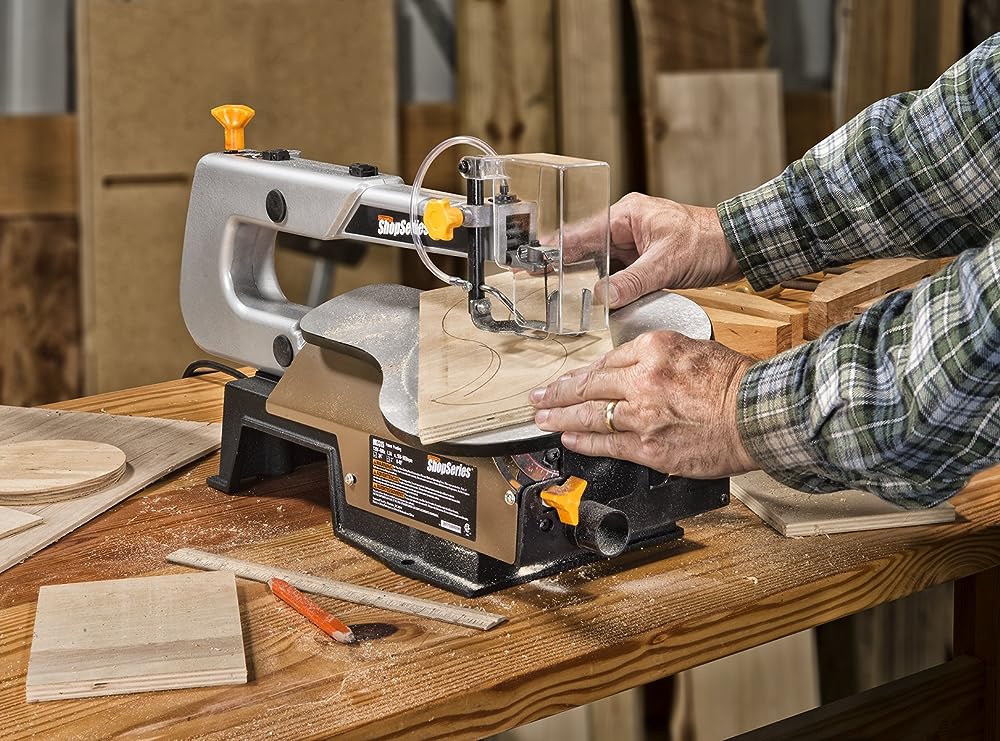 You enjoy crafting and creating gifts for the holidays. Also, you want to invest in the best tool for the woodworking projects you are planning. You’ve done some preliminary research and you’ve narrowed it down either a scroll saw or a band saw, but what exactly is the difference?

It must be said that when it comes to the answer to your scroll saw vs band saw the debate, you will first need to know the specifications of your project before you even attempt to go saw shopping. Here we will explain this in detail.

Scroll saw contain a narrow saw blade mounted vertically. It is anchored on both the bottom and top and it moves up and down to cut wood.

It is set up similar to a sewing machine, and it works in approximately the same fashion, with adjustable speed and plus control via a foot pedal.

You can maneuver wood any way you need to cut it in the pattern desired. If you want to cut small pieces with very intricate details, you should definitely purchase a scroll saw.

Reasons To Use A Scroll Saw

You can change the blades in a scroll saw so you can complete a plethora of projects, and the process couldn’t be any simpler. More than anything, you just need to get the tension correct, but this is usually achieved with the easy-to-use tension-adjusting dial or knob.

Since the scroll saw has such a short blade that is easily interchangeable, it can facilitate what are called “plunge” or “inside” cuts. For example, let’s say that part of your project contains a design using the letter “O” or the numeral “0.” The scroll saw can easily remove the inner circle without damaging the outer part, whereas a band saw would not be able to do that.

It is actually the go-to choice for many crafts including those featuring detailed edges, such as geographical representations, animals, wooden letters and numbers, silhouettes, and jigsaw puzzles. It is especially simple if you use a paper or cardboard pattern to cut the wood accurately.

Also, because it can cut into tight corners, it is the standard tool for creating holiday ornaments and dollhouse furniture.

You can even tilt your blade to make angled cuts while keeping the table part of the machine flat.

The precision of the cut has so few flaws that you will not have to sand the wood much after cutting.

Scroll saws are quite quiet, so they will not annoy you after long periods of consistent use.

Scroll saws do not generate much saw dust, so clean up is easy, and, while you should always wear safety goggles, you will be much less likely to get hit in the eye with flying debris.

With a little training, and some intense supervision, a scroll saw is actually easy enough for a beginner to operate. It is actually the premier tool used to introduce teens to woodworking.

Band saw contain a flexible blade that only moves in a continuous downward motion. It has a flexible metal cutting blade, which comes in various sizes for different jobs, that rotates on two vertically-placed wheels.

It may remind you of an old-fashioned film projector, and it also has similarities to the way a bicycle chain operates. The wheels turn in accordance with to the engine causing the blade to turn.

You can use push the wood or other materials in at an angle or in a straight line, or you can maneuver it to cut and create curves.

If you want to cut larger-sized pieces, such as those used to assemble pieces of furniture, you may want to consider investing in a band saw today.

Reasons To Use A Band Saw

A band saw blade is completely open from the front to the back. As such, you can cut longer and wider pieces of material with no limit on size. Conversely, a scroll saw has a back wall perpendicular to the table piece, and this limits the size of the pieces that you can work with.

You can actually perform long rip cuts similar to what you can do with a table saw. The only difference is that you would have to specifically work with much thinner materials. The thickness is limited only because of the amount of room there is between the top of the saw and the table. In a nutshell, if the material fits on the saw, it can be cut, as long as there is enough slack there so you can control the material when it is being cut.

Band saws have the amazing ability to cut through much thicker pieces of wood than scroll saws. The scroll saw only has a six inch blade that moves up and down, which means it really can’t cut anything thicker than two inches. Band saws do not have this issue.

With a band saw, you are not pigeonholed into working with only wood. Unlike a scroll saw, it is actually quite strong and tough enough to penetrate a range of materials including, but not limited to, polyurethane plastics, and a range of lightweight metals, such as tin and copper. This, of course, all depends on which of the interchangeable blades you are using at the time.

Like the scroll saw, band saw has many different blades that can be switched out. These different types of blades can cut through almost any material easily, including metal, plastic, and both hard and softwood. The thinner blades can even provide you with minute details. However not unlike the scroll saw, they will never be quite as precise.

Band saws are best at providing straight cuts that perfectly accurate and they do so quickly. This is because the blade cuts in the same direction as opposed to an up and down or side to side motion.

Another advantage of using the band saw is how it cuts perfectly clean curves into thick wood, making it the ideal machine for creating bookshelves, nightstands, tables, and wooden trim. They cut irregular waves as well as perfectly round circles, which scroll saws can’t do with any wood thicker than two inches.

The band saw can even be used as a planer. Just re-saw your board lengthwise, leaving it much less thick than it started. This is actually a faster method than planing away wood repeatedly until you reach the desired thickness.

The band saw is comparable to a power tool, but it is gentle enough to leave behind the characteristic grain when it rips and re-saws wood. Usually, only a hand saw is able to do this. This means that a board re-sawed in two will result in two pieces that appear similar on the inside faces. They can then be used together to give a furniture project a look of continuous grain, which is very pleasing to the eye.

While it would be preferable to have both a band saw and a scroll saw in your workshop, if you had to choose one, it would be completely dependent on the projects that you plan to use your saw for.

Use a scroll saw if you are planning to create small, detailed crafts with interior cuts and many minute details. This is especially true if the wood you are working with is under two inches in thickness. If this is what you are looking for, you should invest in a scroll saw today.

Use a band saw if you are working with thicker, longer, and wider pieces of wood, or with plastics or metals. This includes larger projects like bookshelves, kitchen tables, and build furniture. If you are more interested in a tool that can handle larger materials, you should purchase a band saw now to get started.