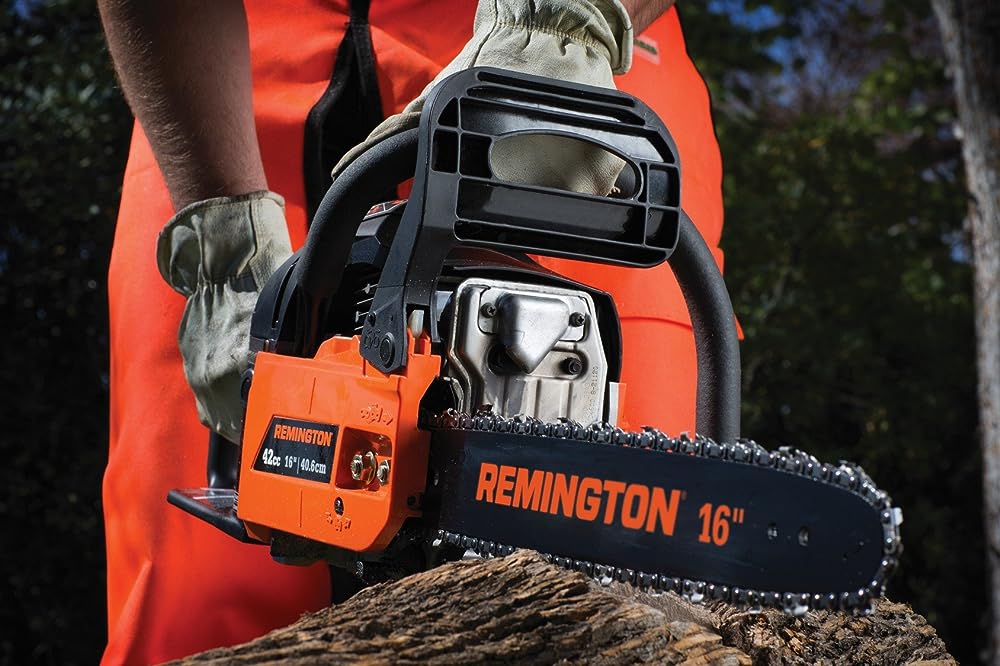 This is a list of the terminology commonly used in reference to a chainsaw or a chainsaw part or in a conversation or an activity involving the use of a chainsaw.

Air Filter – a permeable rectangle mounted on the opening that lets in air to the carburetor. It filters the air and prevents dirt from entering the carburetor.

Anti-Vibration System – special handles or fittings which absorb the vibration produced when the chainsaw is running. They reduce the impact of vibration on the chainsaw operator, hands and arms and thus prevents hand-arm vibration syndrome.

Axe/Ax – A tool used for chopping, pounding and cleaving wood. It is a part of the operator safety equipment but can also be used to straighten the lean of a tree.

Back Cut– one of the three cuts required when felling a tree. The last cut made on a tree; on the other side of the tree from the undercut and directly above the horizontal cut of the face-cut (undercut).

Barber Chair– used to refer to a situation where a tree which is being felled splits vertically leaving a part of the tree on the stump. It usually happens as a result of an incorrect facing or back cutting.

Black/Gray Check– describes the act of checking the state and utility of the essential parts of a chainsaw to determine whether it is in good condition. These parts include; switches, fasteners and handles. The term black/ grey check is mostly for Stihl and Husqvarna chainsaws respectively.

Bole– used to describe a grown stem that is capable of producing timber or large poles.

Boring– the act of positioning the tip of the guide bar to saw into a tree when either felling it or bucking it.

Bucking- cutting up a felled tree into logs.

Bumper Spikes/Dogs – metal prickles or ‘thorns’ which act as a hinge between the chainsaw engine body and the guide bar hence providing support or stability to the chain during cutting or felling.  It is sometimes referred to as dogs.

Butt – used to describe the bottom end of a felled tree.

Carving Bar– a special bar designed for chainsaw carvers. When used with the chainsaw carving chain, they can help carvers bring out more detail in their work.

Cat-Face – a mark or malformed part at the base of a tree caused by rot or fire.

Centrifugal Clutch – used to refer to the part between the saw chain and the engine. Usually, this clutch is engaged when the chain is running and detached from the engine when the chainsaw is idle.

Chain Brake– often used for emergency braking situations, a chain brake can stop the chain in a split second. The chain brake is deactivated by pushing the top-hand guard forward to engage the brake and pulled back to disengage.

Chain Catcher – a metal or plastic guard that is designed to prevent the chainsaw user from coming in contact with a broken or derailed saw chain.

Chain Gauge– The width or sizes of the chains drive links. It is determined by calculating the part of the drive link that fits into the indentation or groove of the guide bar. The chain gauge is usually quantified in the thousandths of an inch.

Chain Pitch– describes the distance between the saw chain’s drive connections. It shows the user the general size and the weight of the saw chain. A large pitch usually indicates a bigger and heavier chain and guide bar.

Chain Tensioning– describes the act of adjusting the chain tension or tightness.

Chaps – used to refer to special trousers that are worn by chainsaw operators as part of the recommended personal safety gear.

Choke– a device designed to regulate the proportions of air and fuel that gets into the engine for combustion to occur.

Clear Cut– describes a situation where all the trees in a particular area are felled or in the process of being felled.

Danger/ Hazard Tree – a standing tree which could fall and cause harm to fallers or passersby because of any reason. It may be leaning in the direct path of the tree that is to be felled or it may even be damaged or rotten hence unstable.

Depth Gauge– Parts of the chain that precedes each tooth and measures or controls the depth of the cut made by the teeth of the saw chain.

Engine Displacement– used to describe or refer to the maximum amount of air moved by the pistons in all of a chainsaw’s engine cylinders. It represents the engines horsepower and indicates the volume or size of the engines cylinders.

Escape Route– a predetermined route which the fallers use to exit when bucking or bucking to avoid being injured by the felled tree.

Felling– describes the action of cutting down a tree. The person doing the felling can be referred to as a feller, a chainsaw operator or a sawyer depending on the context.

Forest Service Approved – Used in reference to a term, item or activity that meets the recommendations or specifications of the forest service.

Fuel Filter– it filters dirt and debris and prevents it from entering into the gasoline/ fuel tank.

Fuel Stabilizer: this refers to a component that slows down or prevents fuel degradation.

Grubbing– describes the action of digging around a tree stump in order to make it loose and easily removable.

Guide Bar – This refers to the long thin part that projects out from the chainsaw. The saw chain is usually fitted to rotate around the guide bar. It is also known as the bar-blade.

Gunning–   the act of aligning gunning marks with the chosen felling direction.

Hand-Arm Vibration Syndrome – This is a debilitating condition that may affect chainsaw operators when exposed to excessive chainsaw vibrations. It affects the bones and muscles.

Inertia Brake- describes a safety device which instantly stops the chain and renders it inactive when kickback occurs. It is as a result of the revolving motion of the chainsaw.

Kerf – used to describe the indentation or hollow curve made by a chainsaw or any other sharp cutting device.

Kickback – used to describe a situation where a running chainsaw is thrust or thrown toward the chainsaw operator by a force that mostly occurs when the nose of the guide bar is not positioned in a proper way. Kickback also occurs when the sawyer loses balance.

Lean– describes the directional tilt of a tree away from its perpendicular position. Sometimes, both the head lean and the side lean may be evident in the same tree. This directional tilt influences the felling direction of the tree. A tree that naturally leans at a sharp angle is referred to as a leaner.

Limbing– the act of removing branches, twigs or limbs from a tree. It is also commonly referred to as pruning.

Manual Brake- refers to a brake that stops the saw chain instantly immediately the front hand guard is pushed forward.

NiCad (or Nickel-Cadmium): refers to an older type of rechargeable battery which contains electrodes made from nickel oxide hydroxide and metallic cadmium.

Chainsaw Oiler- refers to either an automatic or a manual system (depending on the chainsaw model) which allows and regulates the amount of oil which gets into the guide bar and the saw chain.

Pinch– used to describe a situation where the chainsaws guide bar gets stuck in the wood during a cut.

Pole Saw-refers to a chainsaw attached to a long pole such that it allows the chainsaw operator to operate it from a distance.

Pre -Mixed Fuel- describes gas, engine oil and fuel stabilizer that comes in one container having been pre-mixed to ease the work of the chainsaw operator.

Pull-in – describes a situation where the chain on the bottom of the bar is pinched or strained causing it to suddenly stop; pulling the saw forward and often away from the chainsaw operator.

Push-back – describes a situation where the chain on the top of the bar catches another object and is pinched or strained hence stopping suddenly. The force that is created throws or pushes back the chainsaw towards the chainsaw operator.

Safety Protective Gear– a term used to refer to the clothing and devices that are recommended for chainsaw users when operating a chainsaw. They include special trousers, shoes, helmets, noise muffling devices and masks or goggles that will protect the feller’s or chainsaw user’s eyes. They enhance the safety of the chainsaw user when bucking or felling or carving trees.

Safe Zone – used to describe a safe are which has been cleared of any inflammable substances or materials. It is usually located at least 20 ft. and 45 degrees away from the stump and behind the intended direction of the fall.

Safety Zone – a safe area where flammable materials have been cleared such that nothing can catch fire, were a fire to occur.  It is usually intended as an escape by the fellers in the event that a fire risk occurs.

Sawyer/ Faller/ Bucker – used to refer to a chainsaw user or operator.

Scabbard (Casing) – an item that is used to protect the chainsaw chain and guide bar when being moved or stored. It some instances, it is also referred to as a chainsaw case/ casing.

Scrench – refers to a device used in adjusting the chain tension. This tool also allows the chainsaw operator easy removal of the guide bar and the saw chain.

Skidder: refers to a heavy vehicle typically used to pull a felled tree to the landing area.

Spark Arrestor: refers to a screen mounted on top of the muffler. This screen prevents sparks from getting out of the chainsaw.

Tensioners – devices used to loosen or tighten the chain to ensure that it has the right tension to cut wood safely and efficiently. They are also known as chain tensioning devices.

Two-Stroke Engines – refers engines where air intake, power and exhaust happen when the piston is stroked downwards and compression occurs when the pistons are stroked upwards. Such engines often use Two-Stroke; a special mixture of oil and gas that is suitable to be used on two-stroke engine machines.

Undercutting– refers to the act of cutting a log from the bottom and then upwards.

Wedge – a hard plastic or magnesium tool or equipment which fellers use to lift and redistribute a trees weight influencing it into another direction. It may also be used to protect the guide bar from being strained during bucking.

Widow maker – can be used to refer to any loose limb, branch or piece of wood that may fall from above the tree potentially causing injury or death to anyone working under the tree.